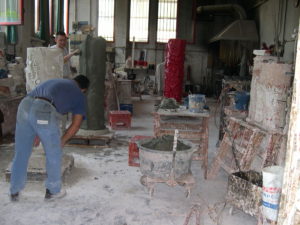 Starting from the chalk model, it is necessary to build a wax mould in order to generate the final bronze sculpture.
This process starts by covering the chalk statue in clay. The clay layer, about one centimetre thick, will be coated in chalk again. The chalk shell, divided in pieces, will be removed so that the previously applied clay can be removed as well. Recomposing the chalk shell around the mould will create an empty space where the clay was laid. This cavity will be filled with a silicone product or gelatine, a soft material that lays on the sculpture and takes its shape, perfectly reproducing the work in all its details. 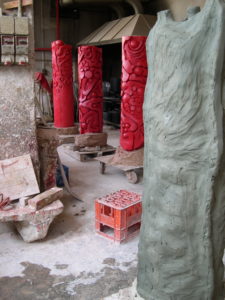 This will create a new soft, negative mould that will be divided in parts equal to those composing the external shell.

The gelatine shape pieces will be brushed with hot wax on their internal surface – so that the latter would create a homogenous layer – and laid back on the corresponding pieces of the chalk shell. This creates a negative shell. The internal cavity of the mould is filled with ‘fluid foundry clay’. It is a crumbly dough made of red clay soil, chalk and water that, when solidified, is able to resist at very high temperatures: it does not deteriorate in the oven and maintains the shape of the sculpture perfectly. 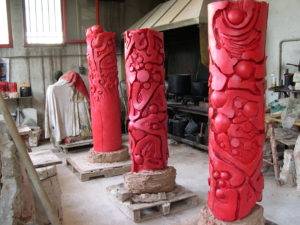 At this stage, undressing the structure of the gelatine and chalk shell, a sculpture with a heart of refractory clay and a wax exterior comes to life. The latter is now available for retouching by the artist or the foundry operator, to better define the shapes.

The extreme ductility of the wax will allow carrying on the desired amendments through the use of heated tools.